Recently I was able to stack up a few front aero wheels for a velodrome aero testing session...  In particular I was interested to try to get hold of a Firecrest rim to be able to test against my current quiver of race rims.  While I wasn't able to get a tubular FC, a mate was able to provide a FC clincher for the tests.

Method:
Ride repeat double laps of the velodrome at constant position, power and speed (in this case between 20 and 45 kmh) Select sections of each speed, and run through aero calculator to determine CdA (co-efficient of drag = aero) and Crr (co-efficient of rolling resistance)

Here are the bling-bling contenders in the test rig, in no particular order: 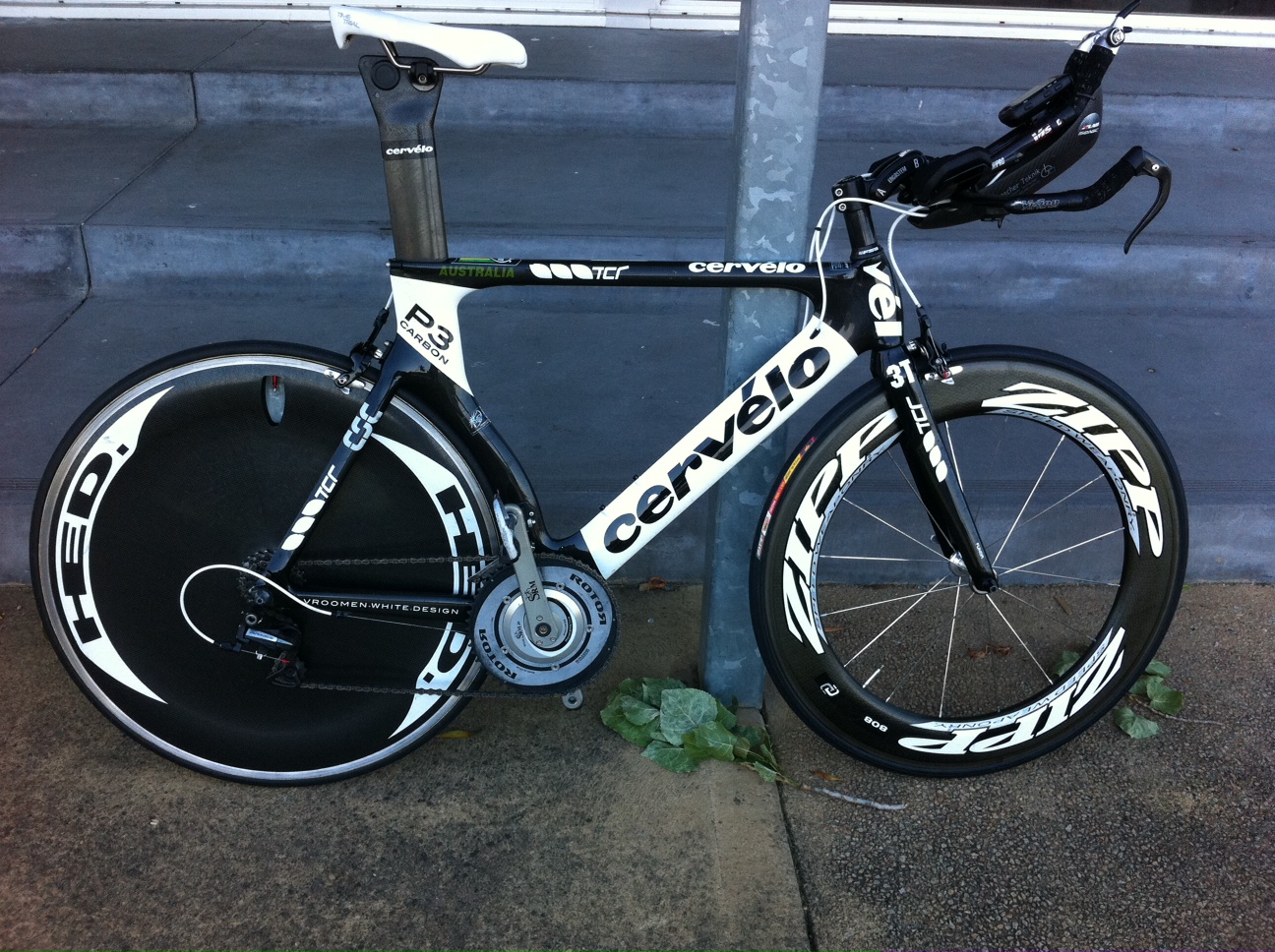 
With a maximum of 3.9w of difference in tire rolling resistance (or 0.0004 Crr), it might be hard to pick up the difference in Crr on only one wheel being changed. So we're probably expecting the Crr to stay relatively the same across all wheels. Fair enough, this is supposed to be an aero test.

Results:
Here's the graph of total power vs speed for all the tests, including some other data that we'll get to in a sec.

The more normal spoked wheel (Campag Scirocco 3G) is obviously worse than the other aero wheels (and I could feel this on the bike), but the other wheels are pretty similar looking for total resistance. This correlates reasonably well with the on-board experience, none of the aero wheels "felt" dramatically faster or slower than each other, but then it can be hard to subjectively judge that while riding 40+kmh. So with the total resistance looking pretty similar across the aero wheels I started looking at the CdA/Crr pairs to see if there is any difference, and there is:

There are a number of interesting points here:
- Obviously the spoked wheel (Scirocco) is a lot worse... meaning if you ride 34 kmh or slower, having the aero wheels above won't make much difference to you compared to using the standard wheel. Once you get to 39-40kmh averages the difference is getting much more significant, and the value of the aero wheels is starting to become much more apparent. If you're strong enough to be averaging over 40kmh, then aero wheels become an absolute necessity over a spoked wheel as the resistance difference is massive. I'm not 100% confident on the Crr value on that wheel though ... seems a little low on the rolling resistance for theoretically the slowest tire of the test.
- The Zipp FC 808 has the next best CdA of 0.226, while the 2 HED wheels end up with lower, and identical CdA but different Crr's. Both the Stinger and 808 data have a very high R2 value, meaning we can be reasonably confident that this difference does actually exist. I'm a little surprised that the Stinger wheel ended up with the highest Crr of the tests. On chatting to Andrew afterwards, it appears that there may not be quite enough glue on some of the tire/rim, and the starved joints/missing glue might be contributing to that higher Crr. It might also explain why that wheel was noisier than the others with a lot more tire noise. Now the other thing that was apparent was that there might have been some issues with the Hed3C data. There were a number of data points that had a higher spread away from the trendline than the other wheels (the R2 value was lower at 0.956). So I went back over old rides on the same equipment and position looking for more data on the H3 and ended up with some data from 8 December (a training session not a testing session), which had more wind (up to 22kmh) and slightly lower air density (1.181). That was plotted as a separate series (H3 - 8 Dec) which ended up as a higher CdA, but almost identical Crr and a slightly higher R2 value, but still not as good as the other test data. In this case the higher CdA is probably due to more wind on that 8 Dec day. The fact that the Crr is only 0.0001 different (around a watt difference) between the 2 tests does suggest that Crr of ~0.0044 may be pretty accurate. If we hold the Crr to be accurate, then it means the 0.211 CdA must also be pretty accurate (since we need that to balance the Crr to match the total resistance). Other spot and time trial data suggests that 0.248 is a high value for CdA for that wheel in calm conditions, and that 0.211 is probably a good estimate. So how significant is the difference between these front wheels over 40km? If we ride 40km at an average of 250 watts we get the following times:

Wowsers! That ends up being a pretty big difference, given both HED wheels had the same CdA - and probably underlines the importance of tyre selection, and thorough gluing in looking for quick times. It also surprises me that there is that much difference by swapping a front wheel only... however it is a leading edge cutting into essentially undisturbed air, so it probably has a lot more effect than a rear wheel which is trailing along through air already disturbed by the front wheel and fork, down tube, legs, cranks and drivetrain...

In these tests the HED wheels did come out faster than the other wheels. The fastest wheel in relatively calm conditions was the HED3, although the Stinger was aerodynamically the same, it lost ground due to the tire/glue job being used against that on the H3. The Zipp FC 808, was slightly slower than the HED wheels, but still significantly quicker than the spoked alternative.  It was a very smooth wheel though, which could be attributed to 23C rim width/wider tire/clincher version, or possibly the engineering Zipp has used to attempt to reduce axial forces from affecting the wheel.
If you're riding around 34 kmh or less, you can largely ignore the benefits of an front aero wheel, it won't assist that much compared to a spoked alternative. If you're riding around 40 kmh you probably should be riding an aero front wheel if you want to be competitive, but if you don't care, cool, ride a spoked wheel. If you're riding above 40 kmh you should definitely have an aero front wheel to be competitive. Thanks to Andrew and Bill DB for the loaner test wheels - without them, we would have had 1/2 the result. :-)

Notes:
As with any data, there exists the potential for errors. The only way to truly measure the difference is to visit a wind tunnel under controlled conditions (particularly if you want to know what happens in cross winds). However this testing was conducted using pretty robust techniques which have seen me get to 4 decimal places of accuracy compared with measurements in the wind tunnel of the same setup. To improve reliability however, repeat testing is always desireable to be more confident that the data variation is not occurring by chance. Going out and slapping money down for an aero front wheel may not give you the same results as those described here, in general terms you will probably receive a similar benefit from the wheel, but specifics such as the rest of your gear (helmet, bike, bottle choices), the fork the front wheel goes in and other factors (body size, position) will influence the final result.
Posted by fishboy at 7:01 PM No comments: