As published on Slowtwitch.com recently, Cervelo recently tested the big 4 TT rigs against the P4 in the San Diego LSWT wind tunnel, in a long series of pretty significant tests.

This means that the test results are actually representative of what we'd expect to see in real world use - ie. someone actually riding a bike round a course, rather than bike only drag figures which are often published from tunnel tests. The second reason this is so significant is because arguably the widely available current best 5 TT bike/frame combos are there being tested, and thirdly, independant observers from Slowtwitch were present during the tests (what level of exposure to tunnel testing they had is unknown however).

Cervelo has stayed quiet on the publication of this material, possibly choosing to release the info via an "independant" third party, rather than publish the test results themselves. Given how much hype surrounds tunnel tests by manufacturers this may be a smart way of releasing the results without incurring the suspicion of "manufacturer bias" prevalent when a manufacturer goes to a tunnel, particularly since their bike comes out either on top or close to the top (depending on the wind angles being tested).

Firstly, the graph of Bikes, with Super Dave on, and trying to get the fastest possible ride - ignore-hydration-do-whatever-it-takes-to-win. This run sweeps from -20 yaw to +20 yaw, also important, because the drive train side affects the run numbers (if you look at drive side and non drive side in isolation you can get an idea, but not the full picture of what is going on.)

What does this show? Well by and large the P4 with a bottle on is certainly better than its competitors in the narrow range of -7.5 to +7.5 degrees of yaw. So if it is a low (or no wind) day, it could be hard to hang onto that guy on the P4 that just came steaming past. At 0 yaw the P4 is an average of 100 grams less drag than the average of the competitors - or around 5% better which is a significant reduction in drag. Between -15 to -7.5 and +7.5 to +15 the bikes chop and change in results, with the P4 being worse than all competitors in -10 to -15 yaw. Strangely, the P4 is again better than all competitors at less than -15 or greater +15 yaw. All competitors to the P4 test faster with a bottle OFF, making the P4 the only bike to go faster with the bottle on (whether you can actually get at that fluid while staying relatively aero is another matter - if you have a P4 you should be racing with the bottle in, regardless of what it contains).

The second part is to compare these results against the Trek Speed Concept white paper that came out last year. This is also available from Slowtwitch. In those tests, they did use a mannequin similar to super Dave, but only published limited data for tests with a mannequin. Most of their published data was without rider... which isn't a problem here as we have without rider data from the Cervelo tests too. Now this data was collected by 2 companies that have years of experience in tunnel testing, from the same tunnel (LSWT). The only apparent difference between these tests is the use of a H3 front/Hed disk rear in the Trek study, compared with Zipp 808 front/Zipp disk rear in the Cervelo study. 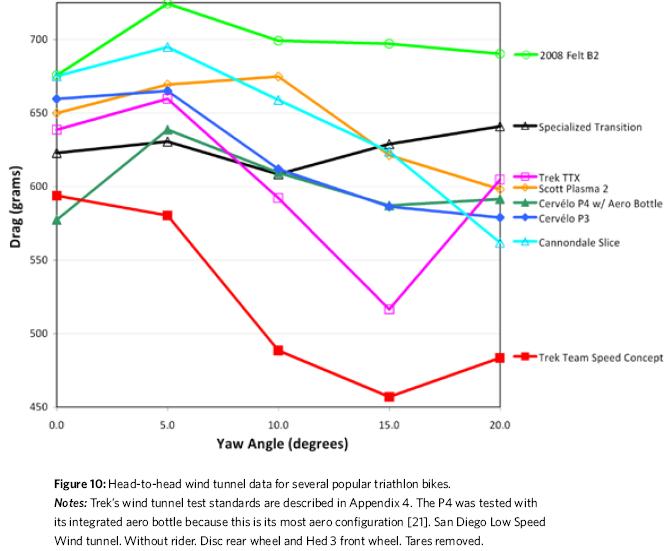 OK, so we have to confine ourselves to 0 to +20 deg yaw, but WTF? How is it possible that these results are so dramatically different between these tests? Admittedly, we only have 2 identical bikes in both tests: Trek Speed Concept and the P4 - but even these figures themselves are widely different for each set of results. If we take the data for P4 and Speed Concept from both tests and overlay it against each other we get: 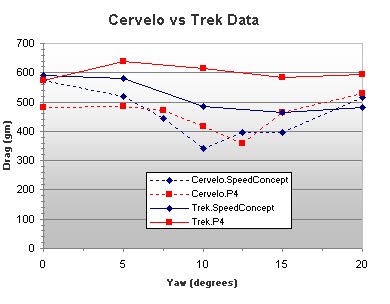 The Trek data (solid line) is markedly different to the Cervelo data (dotted line), and given what I know about the 2 wheelsets (including independant tunnel tests and field tests), I'd be very surprised that either wheelset is the primary contributor to this margin of difference. Given the large (and consistent) gap between P4 and Speed Concept in the Trek data - I'd say "please explain, Mr. Trek".

Other bike companies might argue that the superior straight-on performance of the P4 is: 1) Somewhat due to the superior 0° yaw performance of the Ventus (the minimal drag of the pursuit position seems intuitively to be optimized for straight-ahead winds; and, 2) The most important yaw angles are those between 7.5° and 15°. As to the latter point, that's above my pay grade.

What is nevertheless undeniable, based on the results of this test, is that the P4 is the equal, or near equal, of every other bike in the test at these greater yaws, and better yet when as the bike points directly into the wind.

I'm betting the performance of the P4 in low yaw won't vary that much regardless of what bars go on that machine. As to the idea that yaw angles between 7.5 and 15 degrees are more important, that only works if you're a mere mortal spending the majority of your time racing in wind lower than about 10 kmh (6 mph). Once the wind strength goes above 10kmh (6 mph) you'll be seeing a wide range of yaw angles depending on the direction you're pointing, so you need a bike/wheelset that works well across a wide range of yaw. And if race day dawns calm and still, I hope you've got a P4 hanging on the wall of your garage!
Posted by fishboy at 9:32 AM