Well the folks at Zipp are at it again. A new rim shape, dubbed Firecrest, has been developed and looks like being rolled out across the Zipp lineup.

The shape is less toroidal, and more boxlike, with a much fatter rim profile than before. I suspect this is to allow the use of 23C tires which can also help lower the rolling resistance of the wheel.

There's only one problem... no data. Can't find a single test result (either within Zipp) or externally that has any kind of data. Instead we just have more Zipp marketing speak:

From their webpage explaining the new shape:

"The performance benefits are substantial. With Firecrest, the latest 404 Tubular (58mm rim depth) matches the aero performance of the pre-Firecrest 808 (81mm depth). And the new 808 Tubular is faster than any competitor’s 90mm rim."

A bit better: from a press release:

"At a 10-degree wind angle, the performance improvements from Firecrest are substantial: 9 seconds over 40km for the 404 Tubular, and 15 seconds for the 808 Tubular that is now faster than any 90mm rim and even some disc wheels. At higher wind angles, the benefits are even more dramatic."

But this kind of data is still really annoying, it doesn't give you any idea of how the rim shape actually performs in different conditions ...

Edit: Zipp have since released some data on their website which shows the 404 Firecrest shape performing in comparison with other wheels. 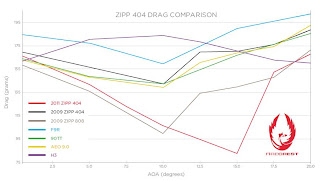 This data shows the Firecrest shape on a 404 outstripping a 2010 808 by a reasonable amount.

Enter YouTube: Finally some real data from a presentation at Interbike ... I'm not even sure how I found this now, but it appears to be the only source of real data available for the Firecrest shape on the web currently (edit: until the above graphic surfaced on the Zipp website).

This presentation is by Josh Portner, the Zipp Technical Director, and (obviously) the dude behind Ask Josh on the Zipp website, and actually explains why and how they have been able to reduce drag and make the wheel more stable in cross winds.

I'm wondering if Zipp had some cross pollination from some CFD work that was published recently ... in that study, the side forces of the wheels were measured and plotted as side axial forces acting on the wheel (they also collaborated with Zipp to check the CFD results against tunnel data). (Paper available as 3.2Mb PDF)


It does make a lot of sense ... if you can design a wheel where the side axial force pushes right on the centre of the wheel, it actually doesn't exert any turning force at all on the wheel, and so behaves so much more nicely in cross wind, rather than having to wrangle it like some carbon fibre cowboy.

Here's a screenshot from the video showing the reduction in drag in a crosswind, both on the front, and on the trailing edge of the wheel as well: 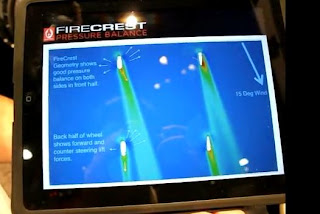 Mind you, this is comparing the Firecrest shape to a traditional V design, so you'd expect to see quite a bit of difference. It's clear how the more rounded back of the rim, once it is the leading edge of the trailing side of the wheel becomes closer to a traditional NACA foil shape with a thinner trailing edge, and therefore has less drag. 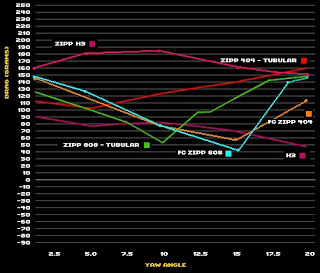 This graph shows a mixture of data from HED and Zipp and plots the FC 404 v the FC 808 directly against each other - what is clear is that the better wheel is probably the FC 404! Why? Because the wheels have almost identical drag down to 10 deg Yaw, and the FC 808 only manages a slight drag decrease to 15 deg yaw, and then the drag on the FC 808 rises significantly after 15 yaw because the wheel is stalling and starting to cause massive turbulence at that point. So the (pretty much) age old rule of deeper=better may not necessarily hold in Firecrest country, the FC 404 should perform almost the same as the 808, and once it gets windy, it performs significantly better than the FC 808. It will also probably cost a lot less than a FC 808 as well.

I'd still like a please explain from Zipp (or HED) as to why their data for the H3 (top line) goes nowhere near the H3 data from Hed (bottom line). What does this tell me? It tells me that there are a myriad of ways to get data from the tunnel, and it is easy to pick or inadvertantly make data that may show you in a more positive light than your competitors (for example, put a nice fat tire on a skinny rim and see how poorly it performs). It also says that perhaps the only true way of telling "faster is faster" is field testing it yourself to see what works for you, relying on marketing speak may well be a sub optimal method for buying speed.
Posted by fishboy at 10:43 AM