Does no one believe tubulars are faster?

Maybe not a guru - just keen on testing stuff. No-one else I know of, including manufacturers, have this data available in an unbiased way.

On Google wattage there has been a lot of talk about poor performing tires and the wattage increases required to power the wheel:

Feel free to use whatever you like, but if there are ways to make things faster with relatively little effort, I'll take those gains thanks.
Posted by fishboy at 7:53 PM No comments: Links to this post

The value of Wind tunnel testing

After recently completing my second trip to the tunnel, I was inspired to see if I could have gotten a better result simply by throwing money at the problem. (Not that there is that much cash to outlay on bling in this neck of the woods.)

It's taken 2 years and a lot of trial and error to get to this point - while I'm not as aero as the Zabriskie's and Landis' of the world, for a non shrinking violet with swim specific shoulders it's getting there. My first round of tunnel testing over 12 months ago scored CdA values in excess of 0.285, with values around 0.275 being as good as it got at that point. Since then I'd done a lot of field testing to try and find ways of snipping off drag, and I was pretty keen to see how the tunnel stacked up with my field tests.

This round of tunnel testing was completed at Monash University, Melbourne, and I can't divulge the real data (such as what wheelsets resulted in what CdA) due to legal agreements, but here is a reduced summary of the data: 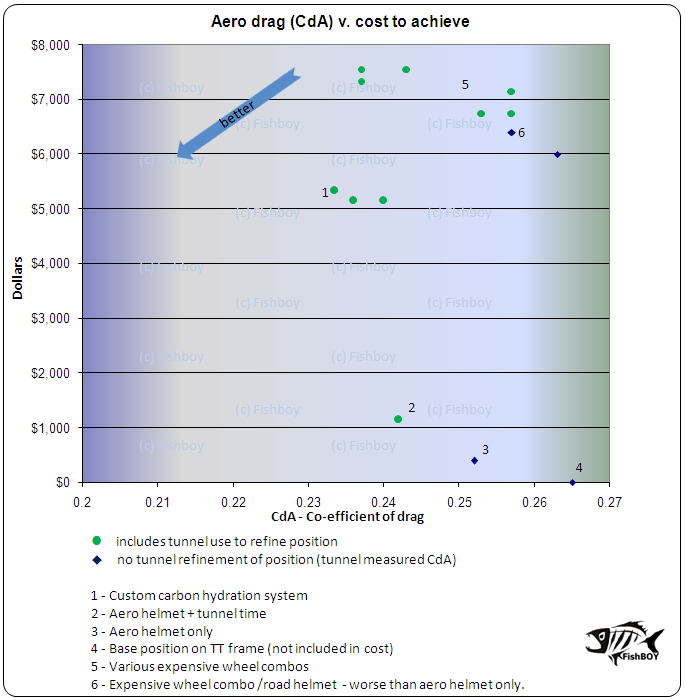 The results show a variety of positions and how many dollars it took to find that position (including the time in the tunnel). So closer to the left side of the graph is more aero, and closer to the bottom of the graph is less spent. Obviously we want the least drag for the least spent, which is the direction of the blue arrow. What's interesting here is that it challenges the notion that blinging up is the way to achieve faster speeds, in fact by running out and spending as much as possible you are pretty much guaranteed of achieving very little unless that spend includes some tunnel time.

All of these tests where conducted on the same TT frame, by the same person (TT frame not included in cost). Point 4 is the default starting point, having spent nothing.

By adding just a time trial helmet drag drops from 0.265 to 0.253 (Point 3) which pretty much confirms that the most effective thing you can do for time trialling or triathlon is add an aero lid, if you don't already have one. Not only that, you may spend more than $6000 on aero wheels and still not derive as much advantage as using the aero lid (Point 6). Despite this, I regularly speak to people who remain convinced that blinging up with wheels is their next big thing, while in fact they are still using a road helmet.

By adding some tunnel test time to our aero helmet we managed to drop drag from 0.253 to 0.243 (Point 2) which was better than almost all the expensive aero wheels we tried, at roughly 1/7th the cost.

Finally the three best price for drag positions (adjacent to point 1) were all achieved with the same wheelset, at roughly 2/3 the cost of the more expensive wheels. Kinda lucky really since these are my default race wheels.

Best position achieved (point 1) was using a custom hydration system, designed/shaped by lil ol me, and brought into its full carbon glory by Raoul Luescher from http://www.luescherteknik.com.au/ - a top bloke and there is nothing that he can't do with carbon. (Raoul is also the bloke responsible for organising the tunnel testing - thanks mate).

So the moral of this story is if you're competitive enough to care about going fast, then less than a grand invested in tunnel time might be a very wise investment, and probably much better than four to six times as much thrown into aero wheels.

In terms of which positions you'd choose, they're numbered 1 through to 6, 1 being the most desireable, and 5-6 the least desireable. Doing nothing (point 4) is probably better than spending $6+k and getting a marginal improvement (point 6 blue dots) - you need tunnel time to refine a position to extract more drag saving. There are a lot of things you can do with 6k!

As a final aside, how did my field tests compare with the tunnel? Best estimate from repeated field tests for my number 1 position (point 1) were 0.233 compared with the tunnel measured value of 0.233 - can't be too upset about that, and it means I'm pretty confident that when I see something in field testing that is repeatable, I need to pay attention to it.

I could tell you which of these would be faster, but then I'd have to kill you ... 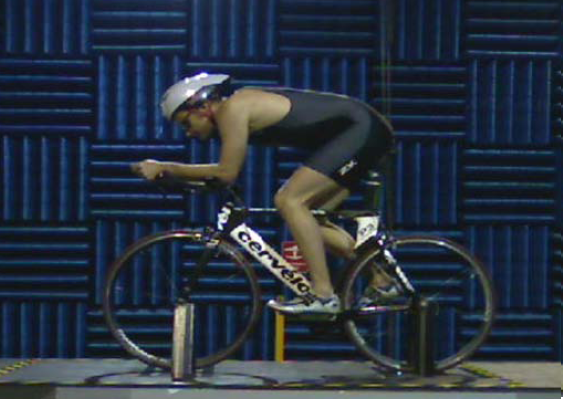 Cyclespeed, TCR, Raoul Luescher, and David Burton and the folks at the Monash Wind tunnel.
Posted by fishboy at 2:47 PM 2 comments: Links to this post